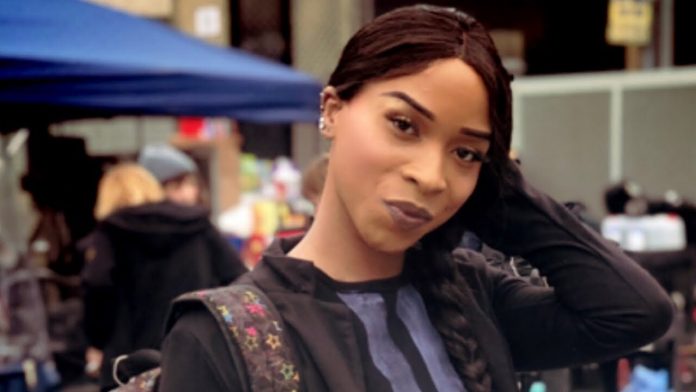 All our lives, we identify ourselves with labels. Our gender, our nationality, our profession, our function in our family. But sometimes life puts more labels on us that we did not choose, and that we sometimes cannot accept. This is a story of a woman who did not let these labels define her.

Sunkee Angel was born as Alvin Butler on January 12th, 1988. She was born in the capital of Alabama, Montgomery, where she spent the majority of her life.

At a very early age, Sunkee discovered that she could sing. By the time she reached junior high school, she realized that she wanted to pursue a professional singing career and she began to write and record music. Although Sunkee, Alvin at the time, was tortured and picked on throughout her adolescent years, this did not stop her determination for becoming the star she knew she would be.

As long as Sunkee could remember, she attended her family’s church where her grandfather was the pastor. As Sunkee attended church, she was taught to believe that homosexuality was a sin and it appeared to be the greatest sin that could ever be committed. After learning that being homosexual (at that time) was a sin in God’s eyes, Sunkee began trying to live a heterosexual lifestyle out of fear of not being accepted and being damned to hell.

Being in fear of living in truth, this led to what Sunkee thought was a heterosexual male persona by the name “DIGIDOO” (pronounced DIGGIE-DOO). Digidoo was a male singer who would sing, dance, and rap while shaking his butt probably better than most women. Even though Digidoo tried to have a heterosexual image, he still had very feminine ways, which made some people question his sexuality while others knew it was a façade.

After finally coming out, Digidoo thought he would be at peace with himself, but he still suffered from confusion because he still didn’t feel whole. As a child, all the way until early adulthood, he also struggled with inner feelings of being the opposite gender which was why he was in conflict with himself. This caused Digidoo to create a female comedian alter ego, Aunt T Jackie (pronounced Auntie Jackie), which made him feel more comfortable and almost whole. This persona somewhat fulfilled his vision as to what he felt his whole life.

In 2012, Digidoo started to feel that it was time to leave Alabama because of the lack of acceptance from his family, and too small opportunities. He then relocated to Los Angeles, California to better himself and to feel more liberated. As Digidoo began to settle into Los Angeles, he began to find support within his community. Digidoo started to crossdress and began wearing make-up most of the time because it made him feel more comfortable. He always had a problem with facial hair, and as time progressed, it began to intensify.

Digidoo was asked by a transgender woman to come to a support group and, and he went. When he got there, he still identified himself as Alvin but the people in the room saw a woman and saw that he was struggling with his identity. He ended up leaving the support group in tears because he wasn’t ready to accept his true identity. He tried moving forward living as a male while dressing as a female. There was a constant battle in his soul because of religious trauma caused by family. He would see transgender women around LA and on social media and over time, this made him think more about transitioning.

In 2013, Digidoo realized that he no longer wanted to live his life as a male, but he didn’t know how he was going to gain the courage to change. Digidoo felt that he wanted to tell his fans and family that he wanted to transition because he realized that he was never male, to begin with. Once he told his mother, she told him that if he was meant to be a woman, that’s what God would have made him. This began to drive a wedge in their relationship because his mother didn’t approve of his “lifestyle”. As time went on, it appeared as though she tried to accept the transition; however, she could not let herself accept her child being transgender.

Despite not being accepted by some of his family, he was led to research about gender dysphoria and realized that this is what he had been suffering from the whole time. In 2014, Digidoo began living life full time as a female and no longer answering to Alvin, Digidoo, or the pronoun he. During this same year, he (now going by she) began going by the name “Sunkee Angel”.

She started taking low doses of hormones prescribed by her medical doctor, who also deals with many transgender women. Sunkee took hormones intermittently until 2017 when she began going taking hormones daily. In the same year, Sunkee had her name changed legally from Alvin Butler to Sunkee Angel.

In 2014, Sunkee learned that she was HIV positive. Nevertheless, she did not let this deter her, for she turned her tragic news into an inspirational music video entitled “I Am Not A Label”. This song opened the door for others to become open about their status and personal stories dealing with stigma. She became a powerful voice for the voiceless. Sunkee is also known for her exotic looks and electrifying dance moves. She has been seen on the comedy-drama TV show “Glee” in the episode “Transitioning”. Sunkee is also rubbing shoulders with A-list celebrities as she pushes herself into the mainstream as a transgender recording artist.

Sunkee is a pioneer and a trailblazer for the trans community. Right now is a perfect time as other transwomen are finally getting their break to be seen. Sunkee is not only an advocate for the LGBT community but also for all people, because she believes that everyone should be able to live their lives free of shame and fear. Sunkee Angel’s aspirations in life include being an accepted transgender recording artist, getting the same amount of respect and visibility as any other mainstream artist; second, she wants to help the world see that you can live your life with HIV or any other disease without living in shame, guilt or stigma; lastly, she would like to be a beacon of light to provoke enlightening thoughts in the minds of the corrupted. She wants to help free others, allowing them to think for themselves, and shake off the expectations that has been placed upon them by others.

Andrena Phillips - October 18, 2020 0
As a society we have come accustomed to building our self-worth based on the opinions of others. The desperate need to fit in has...

Charissa Lauren - July 5, 2020 0
For some, discovering their purpose comes easily. However, for the majority of us, the process of discovery isn't linear, and it evolves and morphs...

Ways to Grow Your Business During the Pandemic

Charissa Lauren - March 15, 2020 0
During the pandemic, many businesses are struggling and full of panic. We want to offer tips and tools to offer unique ways to help...

Contributor - May 6, 2021 0
Written and contributed by Jess Kanotz At random moments, especially now at Christmastime, I wish that my daughter Pearson had a sibling instead of...