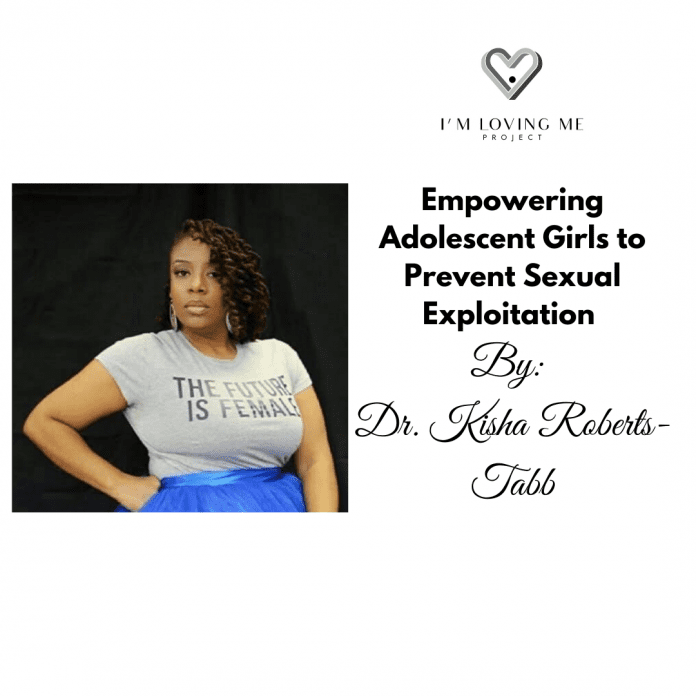 Although the conversation around domestic sex trafficking and the sexual exploitation of our children may be a new one; the occurrence of both labor and sex trafficking can be traced back to biblical times.  Despite discussion, policy reform, and programs designed to address the issue of sex trafficking, adolescent girls still fall prey to traffickers or those who seek to exploit.  Through my work with trafficking victims, I have identified an area in which we can strengthen  adolescent girls’ social trajectory as a means to prevent high risk interactions.

The average age of entry into commercial sexual exploitation is 12, thus preventative methods should begin with empowering our children with information regarding human trafficking as young as 11 years old.  Understanding the grooming process is essential to prevention. Grooming is the process of preparing a person for sexual exploitation. There are five stages of the grooming process: the introductory level being targeting victims.  It is noteworthy that in the current climate of the pandemic there has been a significant up tic of social media recruitment and grooming.  During this level of grooming a trafficker or pimp is looking for noticeable vulnerabilities including, but not limited to, emotional neediness, lacking confidence, low self-esteem, and economic stress. All of these characteristics can be gleaned through social media.

The next stage of grooming involves gaining information and trust through casual conversation via social media DM’s, Messenger, Snap Chat, and texting.  After gaining the trust of a potential victim the trafficker now attempts to fill a need through promising legitimate work such as professional photoshoots, video shoots, music careers, massage therapy, and traveling sales job. During this stage of the grooming process, the promise of a loving relationship is offered, usually by an older intimate partner.  Buying gifts along with the introduction of alcohol and soft drugs like marijuana, pills, and lean is critical to completing the grooming process.

Although unhealthy and harmful, the commercial sex trade is built on relationships. Therefore, one of the most impactful preventative methods embraces the idea of providing examples of healthy relationships.  Teaching our children that all relationships should be grounded in mutuality, trust, and empathy.  Relationships where the appropriate, positive, and compassionate language is used while speaking with one another.  It is imperative that children recognize that healthy relationships are developed through consistency, significant time spent together, and accountability.

Empowering adolescent girls with this information will offer them the ability to distinguish those who have good intentions from those who are looking to manipulate.  With coercion by way of manipulation being the most widespread form of recruitment it is important that our children, specifically girls are able to identify manipulative practices.

As adults we must be willing to have frank conversations with our youth including asking questions: Do you know anyone who has experienced situations where they were forced to do something, they were uncomfortable doing? Have you or someone you know been in an unhealthy relationship? Have you ever been approached to send pictures or exchange anything of a sexual nature?

Adolescent girls are often exploited by someone that they are familiar with through social media or someone they have a relationship with.  These relationships can involve adult intimate partners, family members, friends, or fellow gang members.  I have also observed instances where girls are kidnapped and sold into the commercial sex trade.  In 2020 the National Center for Missing & Exploited Children (NCMEC) reported 17,000 missing youth who were also possible victims of child sex trafficking.

Please consider these precautionary methods to reduce an adolescent’s risk of becoming abducted and exploited by traffickers.

Involvement in empowerment and mentoring programs are also essential in building the esteem and confidence of young ladies as a mode of sex trafficking prevention. Based on the stage of adolescent brain development, teenage girls are more likely to act impulsively, misinterpret social cues and engage in risky behavior.

The benefits of mentorship include young girls having access to different worldviews, experiences, knowledge, support, and advice regarding different educational and career paths, while providing a positive influence.  Involvement in gender-responsive empowerment programming has the capacity to introduce girls to new cultural and enrichment experiences, the ability to share positive values and assist them in avoiding negative behaviors and render successful results.  Mentored girls earn noticeably higher grades, are less likely to engage in alcohol and drug use, and are less likely to cut school.  Truancy, drug use, and previous trauma are all contributing factors that increase a girl’s risk of trafficking. All of these factors can be countered by gender-responsive programming and mentorship involvement.

Dr. Roberts-Tabb has created and implemented programs, mentored young ladies, and has been instrumental in bringing awareness to the Juvenile Probation Department around gender-responsive issues including alarming rates of HIV and AIDS among African-American women and girls, LGBTQ support, and domestic human trafficking; developing and implementing mandatory training entitled Identifying Domestic Trafficking Victims. As the first Human Trafficking/ Gender Responsive/LGBTQ Specialist for Cook County Juvenile Probation Department, Dr. Tabb has worked alongside every branch of government and law enforcement.  As a member of Chicago Coalition on Urban Girls, Cook County Human Trafficking Taskforce,  ICARE, Cook County Multi-Disciplinary Team, Human Trafficking Housing Pilot with the Administration for Children and Families in partnership with Housing and Urban Development, Dr. Tabb has collaborated on both policy and legislation and was instrumental in the FBI’s operation Cross Country 2015, 2016, 2017, and 2018.

Published work included Girl Empowerment…THEory into ACTion: A Bulletin of New Development in Community Psychology, 2012; Girls in the City: Status Report on Teen Girls Residing in Chicago, 2017; Grace: Letter of Reflection to the Little Girl or Young Woman They Once Were, 2018; Whose Little Girl Am I, 2018, Whose Little Girl Discussion Guide and Journey, 2019, and Whose Little Girl 2: Anyone with Money to Buy, 2020.

You can find out more about Dr. Roberts-Tabb’s work on her website.

Charissa Lauren - January 12, 2020 0
"Not only was I able to re-establish myself, launch other successful businesses, and help many others along the way, but I also became debt-free."...

One Day at a Time

Charissa Lauren - December 20, 2020 0
"Success is a journey, not a destination. The doing is often more important than the outcome." - Arthur Ashe My name is Anya, and I'm...

Learning How To Respect Yourself Part 1/ 3

Ellie Curry - September 27, 2020 0
By: Ellie Curry, Confidence Coach When I was growing my confidence I realized I needed three things to help me, the first was self-respect, the...