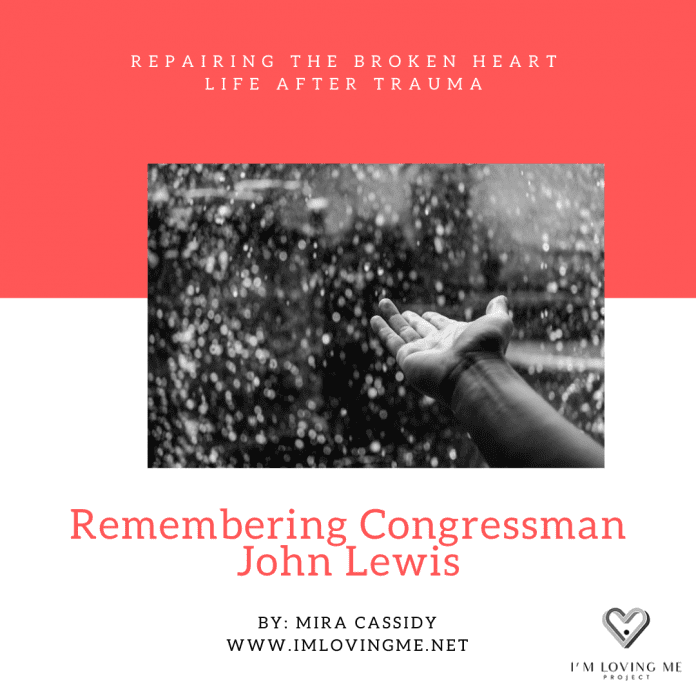 March 7, 1965. It is one of the worst days etched into World History, American History, and Civil Rights History. This day has forever been deemed as Blood Sunday. It was then that a young, fearless, inspirational hero, that many have come to know, love, and admire along with Hosea Williams, followed by 600 people, led the pivotal march across Edmund Pettus Bridge in Selma, Alabama.

As the singing sea of non-violent marches reached the midpoint of the bridge, they started to distinguish a massive barricade that awaiting them of state troopers. The crowd courageously pressed on and then chaos erupted.

“I really believe to this day I saw death.” John Lewis shared on June 28, 1998 when during an interview by CBS Sunday Morning. On Bloody Sunday, Congressman Lewis, and hundreds of others where beaten with chains, clubs, whips, and more as they fought against inequality and their constitutional right to vote.

However, this was just one day out of many that Mr. Lewis dedicated to eradicating hate. As a boy born in Alabama, Lewis saw firsthand the horrors of segregation. One day he wanted to check out a book from the public library and was not allowed because of the law at that time. This put a fire in him that never went out. He became more determined to get an education and change the unjust system.

“When you see something that is not right, not fair, you have a moral obligation to say something, to do something.” John Lewis

John Lewis first learned about Dr. Martin Luther King Jr when he was 15 and then was able to meet him at the age of 18. Taught and groomed by King, Lewis has went on to accomplish extraordinary things that have helped work towards a better world. The lessons he learned as a youth participating in sit-ins to keep cool, hold your head high, and stand with dignity aided him through his career.

Though Congressman Lewis was beaten several times, abused, and arrested 40 times, he believed and taught others to stay hopeful, be optimistic, and never become bitter. If you become bitter than it’s to easy for hate to manifest. Congressman John Lewis lost his life on July 17 and although he will be missed, he will always be remembered.

“Every generation leaves behind a legacy. What that legacy will be is determined by the people of that generation. What legacy do you want to leave behind?” John Lewis

Separating Yourself From Competitors

Mira Cassidy - July 5, 2020 0
The spirit of entrepreneurship and drive runs threw her veins! Lauren Duffy is all about hard work and determination. Therefore, I’m Loving Me Project...

How Do I Feel Confident?

Gloria Ward - August 2, 2020 0
I remember when I was struggling with depression I would go onto Pinterest and search. I search “how to have confidence?,” and when it...

The FIRST female, African American to Launch Her Own Search Engine

Charissa Lauren - March 1, 2021 0
LyNea Bell officially announced the launch of "GOTCONN"  (GOD OVER THIS - CONNECTION) a new search engine. She is the FIRST female, African American...